A progress shot of Big Red, a piece for the IFX Monthly Challenge. Weird. She looks a bit like Roseanne Barr to me. Anyway,  I wanted to post a shot of it before I inevitably screw it up.


Posted by Nicholas Avallone at 11:55 PM No comments: 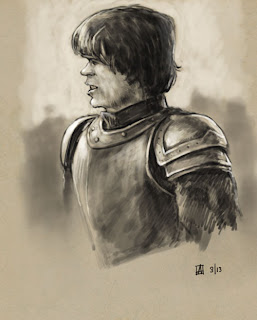 In anticipation of the new season, I've been re-watching Game of Thrones. Here's a little sketchy-sketch of Peter Dinklege as Tyrion, in armor, taken from a screen grab.

Posted by Nicholas Avallone at 11:50 PM No comments:

Something for ChoW at ConceptArt.org. The topic was to design a fantasy character based on a face card from a standard deck of cards: Spades, Hearts, Diamonds or Clubs, and either Jack, Queen or King.

While doing a little research, I learned that the suits represent the 4 castes of medieval society: Spades is Nobility, Hearts is Clergy, Diamonds is Merchant, and Clubs is Peasant. Armed with this tidbit, I decided that using a goblin to represent the peasant class would be sort of fun, if a bit elitist. (Sorry peasants!)

I also got hung up on the idea of a meat crown, so that happened.


Posted by Nicholas Avallone at 3:59 PM No comments: