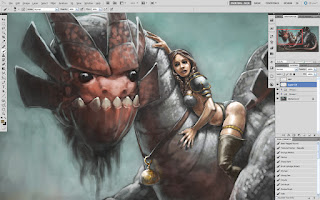 Here's a detail of the thing I've been working on for the IFX monthly challenge for March.
Posted by Nicholas Avallone at 3:54 AM No comments:

Here's a picture I did for ImagineFX's weekly illustration challenge. The theme this week was "Rocketgirl Rita, the quintessential 50's sci-fi pinup girl." Despite being well received, I think my entry strayed a bit from the theme, but what the hey.


Because I like pinups to be both funny and sexy, I hit on the idea of a girl helplessly riding a rocket into space. So I scrawled the idea down. (Fig. 1)


Next I pushed the initial sketch back to about 20% and worked on top, refining the pose a bit. (Fig. 2) I was trying to sell the idea of her hanging on to the rocket, and express some anxiety about falling off.

After that, I started refining the anatomy and adding some preliminary color. (Fig. 3) This can be a tough stage, trying to get some colors that work together, but in this case it seemed pretty simple: I knew I wanted a military green for her clothes, with some red accents, and a sky background. I also trimmed her badonk a bit, because it was looking just too massive. I also made her arms straighter, increasing the tension of the pose. I found this helped make her look like she is trying to hang on, rather than just riding the rocket.

Next (Fig. 4) I added some clouds on a masked layer, using two different cloud brushes. I basically ran them in a diagonal, then used a distortion filter to make them look like they are curving off along the Earth's horizon. I also put some shine to the rocket, again using a masked layer to keep the edges crisp even while using huge Overlay strokes. The Overlay brush mode does really cool things with colors, and I got a nice sheen to the rocket this way. I also perked up her left breast a bit.

After that I added some modeling to her clothes and hair, and began building up the rocket's fiery exhaust. (Fig. 5) For that I used a brush comprised of random-looking dots, building up in several layers in various modes (Overlay & Screen mostly). I hit the resulting dots with a motion blur filter, and did that a few times, building up color & layering.


Next (Fig. 6) I added some more highlights from the sky, and hit her with the glow from the engine. I also put a nice radial gradient glow around the flames, again set to Overlay, and added a texture overlay to the rocket. In addition to coloring the helmet and adding the dome, I vignetted the entire piece by using a blue color fill layer set to Multiply, then knocked down the opacity and masked off the center with a radial gradient on a mask. I feel like this really helped tie together all the colors & elements in the picture, reinforcing the focus on the subject.


To finish up, I knocked back some of the rocket texture because it was reading more sharp than anything else in the picture -- too photographic. I also softened the rocket's edges and added the stars & reflections on the helmet. Also, someone suggested I make her hair on the same angle as the rocket exhaust -- a great idea, since the color I chose for her hair was meant to emulate the fiery rocket color. A bit more color saturation and level adjustment and I called it done.


Posted by Nicholas Avallone at 3:18 AM 3 comments: 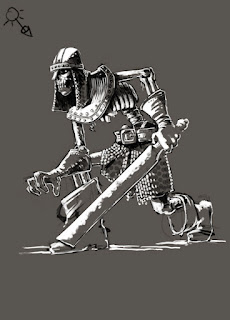 A little black & white test image that I thought came out nifty, especially on that groovy neutral background.
Posted by Nicholas Avallone at 10:48 PM No comments: