I've more or less finished the Koschei painting, and submitted it. So here it is.

It was a great deal of fun to work on, and actually didn't take very long -- maybe 10-12 hours total? I think I'm finally settling into some sort of process.

I started out with a very loose sketch (first frame, below). I did that in my sketchbook with a dark, blunt pencil and a very light touch, just letting things happen. Next I took it into Photoshop, set it up as a Multiply layer, and dropped a gradient behind it. I wasn't feeling the pose of the arms, so I redid them completely. I gave him more of a menacing hunch, like he's ready to spring, while creating a nice triangle pointing up to the right with his upper arms, lower arms, and leg.

Then I worked up some tones in the figure, pushing the shadows back and pushing the highlights up. I threw down a rough layer of blue to separate his skin tones from the background, and further enhanced that separation by building up the light behind him and reinforcing his silhouette.
Next I gave his face and beard some detailing so as to draw attention to that area, and added the cloak streaming out behind him. Oh yeah, and the duck. I had to use reference for that!

Speaking of reference, at this stage I started collecting reference images from the web: pictures of old faces, Slavic patterns & designs, Russian hats, photos of Ian Anderson ("Cross-Eyed Mary" was going through my head for most of this painting...)

The final stage consisted of making choices about his headgear and working out details on his clothing & jewelry, then enhancing the color saturation a bit.
Posted by Nicholas Avallone at 10:00 PM 1 comment:

I'm working on a piece for the ChoW over at ConceptArt.org called Koschei the Immortal. He's an old Russian/Slavic folk-character who has hidden his soul away and thus is immortal. But he looks ancient and bony (Koschei is similar to the word for "bones") and pretty horrible. If one could find and destroy the receptacle into which he's placed his soul, they could destroy him. (The receptacle is usually a pin inside an egg inside a hare inside a duck inside a chest on an island in the middle of the sea.)
So here's what I've got so far. I'm still rendering out details and polishing, but don't want to go too far with it, because I like the immediacy and energy of the strokes. The hat, boots and kilt are recent additions to make him feel less like a generic undead or crazed prospector, and to give him a touch of Russian flavor.

So I'm pretty settled on the latest hat he's wearing: I went through several different ones, from a fairly standard Russian nasal helm, to a Russian Orthodox headdress, to a traditional Russian fur hat with flaps. Playing with the various layers I stumbled across the fur-hat-with-flaps combined with the top of the nasal helm. It's my favorite, and I feel like it evokes a bit of that Russian/Turkish thing. It carries the directional energy of the figure more than the others, too. I liked the priestly thing, but I feel like it was breaking the directional energy of the figure too much. The fur hat seemed a little anachronistic, and the original helmet was a little boring and didn't feel "Russian" enough.


P.S. When I say "Russian", "Turkish" and "Slavic", I mean these things in only the most broad and sophomoric way. I didn't do a lot of cultural research for this!
Posted by Nicholas Avallone at 11:05 PM No comments:

Here are a few pages from my sketchbook. Mostly just doodles and stuff from this summer. 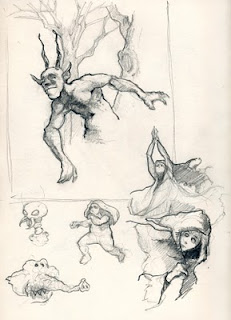 Posted by Nicholas Avallone at 2:07 AM No comments: