I should be less random about posting here. Alas! 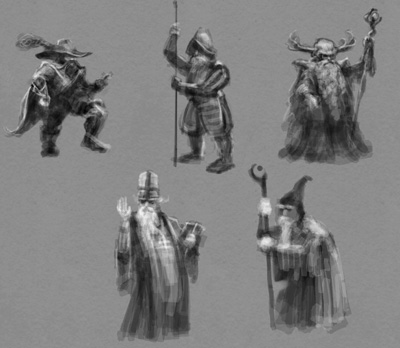 Taking inspiration from Bobby Chiu's recent Fairy Tales Reimagined contest, I started up a new project. I'd had a few ideas rattling around for Snow White and the Seven Dwarves as a classic D&D adventuring party, with each one taking on a distinctive character class. I'd already gotten some ideas down for Snow White herself (as a ranger, since she's like friend to all the animals) but needed to generate some dwarves quickly. So I cranked out a few thumbnails using my new brush.

I dig this new brush. And it's so simple. It's basically just a square brush tweaked to work like a design marker. (Opacity 15%; Shape Dynamics- Size Jitter: Pen Pressure, 34% minimum diameter; Angle Jitter: Direction; Smoothing on.) 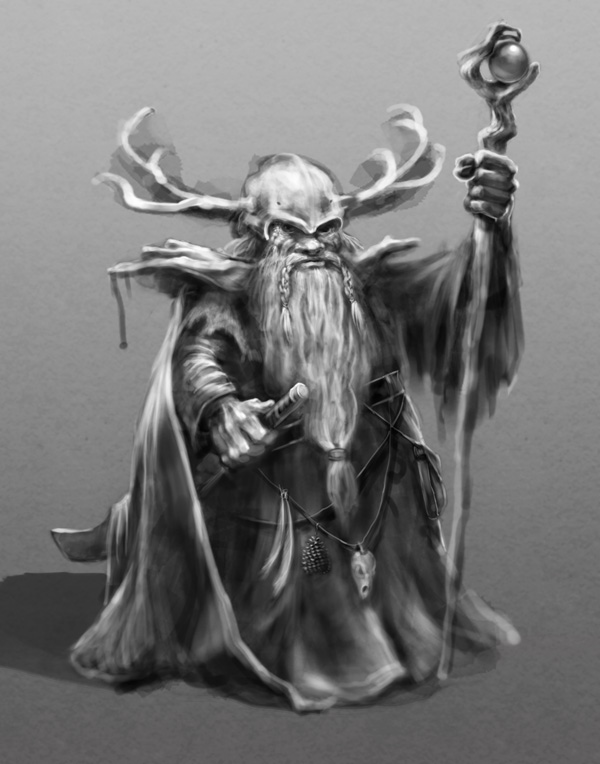 Working fast and loose in black & white over a simple gray textured background, I've gotten some results I really like. The tones build up nice and slow with those settings, and the rough squareness of the brush keeps me from getting too fussy early on. It's all about blocking in shape and tone, without stressing over details too much.

I took the Druid guy and worked him up more, again starting with the marker brush, just with a much larger canvas size. After a while, I began to refine with some more traditional brushes. There's a lot of tonal layering going on, working up shapes and slowly refining, which seems to be working out well for me. There seems to be something about the very quick and gestural start, followed by a slow, methodical period of refinement that seems to suit me well so far.


Posted by Nicholas Avallone at 12:21 AM No comments: